An Interview With Julie Brown Smith

An interview with Julie Brown Smith

Your work has such a beautiful balance of movement and stillness, and this seems perfectly expressed in the high contrast of ink on canvas. As you say, you create "an eternal record of a moment, stripped down to its essence, raw and distilled." This style was new to me, and I love it. Can you tell us more about the process? Do you work from photographs? Do you think in terms of areas of light and dark or the composition as a whole, or both at once?

Thanks so much for those wonderful comments. I do work from photographs. The Urban Landscape Series uses my own photos from travels to major cities, such as London, Oxford, San Francisco, and New York, and The Photobooth Series begins with a standard photobooth strip of four images, rendered on canvases twenty times the size of the original. I decide on the composition and do a preliminary drawing establishing the areas of light and dark. The most crucial and time-consuming part of the process is determining the value structure: which grays in the original photo will be white, and which will be black.

I love the titles of your pieces. They turn one moment, frozen in time, into part of a larger story, intriguing and memorable. Your images are arresting, visually, but the titles give them a resonance that raises them to a whole new level for me. Are you a writer? Do you think about your images as part of a larger story? Do you know or speak to the subjects in your pictures, or are you inventing a world for them?

The titles are very important to me. The cityscapes use original lines of poetry I select that I feel express the emotion in the piece. The photobooth work uses the location of the photobooth (for example, Santa Cruz Boardwalk) coupled with the name of the subject (Sean) and the number in the series, creating a sense of place. I either use the strip “verbatim” in the order each photo was taken, or manipulate the images to create a new story. I am also a writer, and recently graduated from UC Berkeley with a degree in rhetoric, so the words are as important to me as the images. I know most of my subjects, and think about their personalities as I paint them, but I do feel I invent a new world for them. My work with these images creates a conversation between myself and the subject, and this conversation is continued with the viewer who overlays their own meaning to each piece. 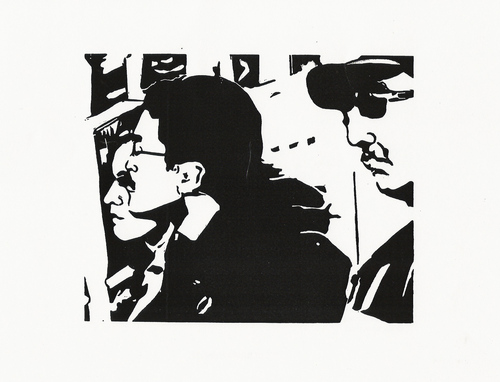 At second glance the sky is overcast and there are ten keys stuck to the page in my typewriter.

You say your new project focuses on men. I'm intrigued! Can you tell us more about it? We have quite a history behind us of men treating women as subjects, and I'm interested to see what happens when you turn that around.

I am so excited about this new project, and am happy that everyone I have discussed it with is interested in how it will evolve. I realized that there is a long history of men painting men in archetypal roles, and also that of men using women as subjects that range from saint to fallen woman, idealized, sexualized, and even distorted. I have used men as subject matter for a long time, and have discovered that I am one of very few women doing so. I decided to investigate the history of women painting men: why they have not historically painted men, which women have used men as subject matter in the past, and which contemporary female artists are painting men now. I am collecting photographs from men and creating a body of specific work based on these images that the men select of themselves. I am simultaneously writing a book about the historical considerations above, and am exploring the ways in which the female gaze is similar or different to that of the male gaze, and how the male gaze may be subverted in a responsive sense by this relatively recent female gaze. It’s extremely exciting!

Your work, with its urban hustle coupled with a wistful sense of loneliness and people just going on about their lives, lost in their own heads, reminds me of Frans Masereel's The City. What are your artistic influences? What other things affect your work...books, films, music?

I love your description of my work. It is spot on. There is an underlying tension between the urban environment and the individual, as well as the inherent loneliness of the photobooth, a machine in the middle of a public space that one steps inside alone. I sometimes feel that we are lonelier in the middle of a crowd than we are on our own. It’s part of being human. I had been creating my linocuts for a long time before I discovered Frans Masereel, but he is definitely a kindred spirit. I am definitely intrigued with the work of Chuck Close and Andy Warhol, but two of my recent artistic influences have been the photographs of Diane Arbus and Nan Goldin. They combine that same feeling of loneliness and urbanity that is prevalent in my work. This emotional theme seems to run like a thread through music, film, and books that may not influence my work as much as echo it: Bill Evans solo jazz piano; the film Lost in Translation; and my recent obsession, the autobiographical opus of Norwegian author Karl Ove Knausgaard. My long love affair with classic and modern literature provides me with the emotional center from which I create my artwork. The writing and art are connected in the same way that each subject is connected to his environment. The work takes on a life of its own, and provides me with surprises each morning when I step into my studio.

Previous: Portrait Commissions: From the Classic to the Unexpected