The coastline of the British Isles has been measured at close to 19,500 miles long. No place in the United Kingdom is more than 70 miles from the coast. It’s no wonder, then, that the history of British seascape painting is rich and varied, and that artists today are still drawn to the subject. The sea has long attracted humans as a source of mystery and beauty, a pathway to unknown places, a display of the awesome power of nature, which we can neither control nor understand. If American beaches are bright and colorful, teeming with sunbathers and surfers, British beaches are moodier and more varied. The patterns of clouds and waves, sunshine and shadow lend themselves to a range of different treatments, from the loose and nearly abstract to careful classical realism. 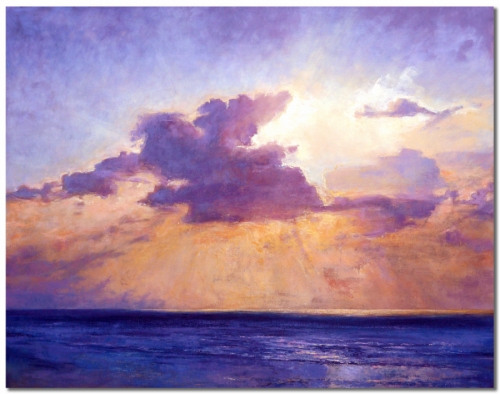 Nick Gonzalez’ style varies from painting to painting, “from high-realism to minimal abstraction, from poetic mood to formal construction, from high drama to fleeting moments of play.” He begins with an emotional response to something he witnesses in nature, and the developmental journey of the painting carries him on a “passionate process of making permanent those initial impressions and visions.”  He says that his paintings are not so much about the subject as about the way the subject illuminates itself, which is a phrase that resonates in the beautifully captured light of his seascapes and his paintings of coastlines and beaches. He captures the luminous rosy glow of dawn, the cool blue evening, shafts of light piercing moody purple clouds, and the tense play of lights and shadows before a storm. 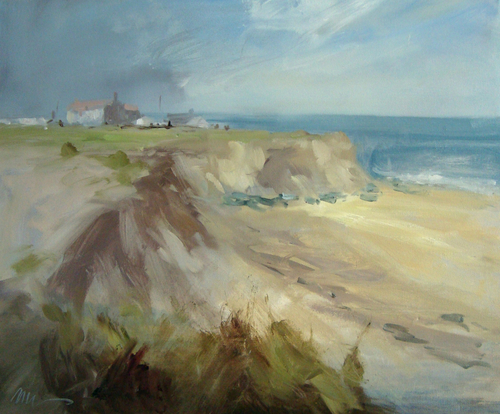 Martin Kinnear quotes renowned English landscape painter John Constable as saying “Painting is another word for feeling,” and it is this philosophy that informs Kinnear’s work. As a teacher, he’s examined a variety of well-known artists’ treatment of sand and sea, painting seascapes in the manner of Whistler, Turner, Aivazovsky, Ruisdael, Money, Church, and Seago. His own work is a study of light as seen in various seasons and landscapes of Norfolk. Happisburgh is a “quick direct study,” which shows a cluster of buildings on a small cliff over the sea, with grey clouds behind them and a high bright sky stretching beyond. 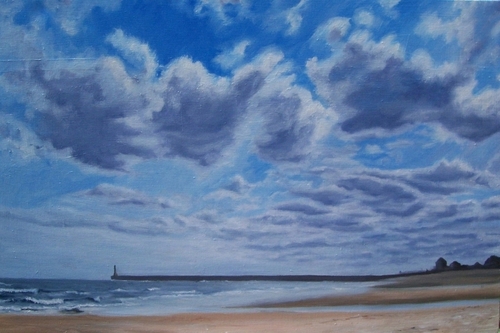 Avis Mastin is a biologist, and she sees art as an extension of humans’ need and ability to communicate, to say, “Look again, this is significant to me, this is how I see the world, this is how I feel bout it. Do you feel the same?” In a series of paintings of the Sunderland, she examines rocks and mist, rough seas and calm seas, pale clouds and sunshine and storms. Her paintings are inviting and thoughtful and frequently have some slight suggestion of human interaction with nature: a lighthouse, a wall, or a lone figure contemplating the water. 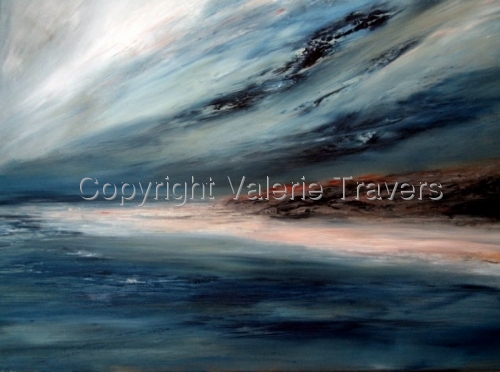 Valerie Travers lives in Guernsey, Channel Islands, and when she paints the sea, she’s painting her home and her roots. “Surrounded by sea it is natural to be touched by such changing beauty and this I try to capture in my work. Seascapes and skies have moved me for as long as I can remember as they are forever changing, and always inspirational. Sometimes soft, gentle and almost childlike. Other times fierce, strong and dramatic.” Some of her paintings are specific and realistic, like portraits of loved and familiar sites. Others are nearly abstract, explorations of the merging shapes of clouds and waves, and of the emotions they provoke. One of these, Overcast, is a beautiful study of changing weather sweeping over a moving landscape.

The sea, the sky and the beach present a seemingly endless array of moods and symbols. Whether home or holiday, tranquil or wild, at sunrise or sunset, the coastline invites artists to experiment with different styles, trying to find the one that captures the exact aspect of a changing place and time.

Next: Spring to Life