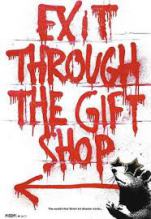 Exit Through the Gift Shop is a film that may or may not have been directed by elusive British street artist Bansky, and is about Thierry Guetta, who may or may not be a real person and who may or may not also be an artist named Mr. Brainwash. Is the whole film a mischievous hoax? A straight documentary? A mix of fact and fiction? I believe it is, of course, the last one, as are all films. (It’s clearly not, as Banksy claims, a re-edit of hundreds of hours of Guetta’s footage of street artists at work, because Guetta is in at least 90% of the shots.)

Whatever else it is, I think Exit Through the Gift Shop is a sneakily beautiful film. It’s clever and amusing, certainly, but underneath all this lies a warm and beating human heart. The film asks questions–literally–the characters are always asking questions, and then contradicting themselves in ways that raise more questions. It makes us think about anonymity and celebrity, about the commercialization of art, about whether or not art has any meaning, or needs to have meaning. Guetta’s art, which is dangerously similar to Bansky’s own, is seen as meaningless, but it sells for lots of money, and Guetta, like Bansky, becomes a celebrity, which seems like a depressingly empty pursuit. The film questions whether or not there are rules, if we should play by them or make up our own, and if any of it really matters. “I don’t know how to play chess, but to me, life is like a game of chess.”

Guetta supposedly took up the video camera because he didn’t want to miss anything. As a child he was away from home for the death of his own mother, and now he obsessively video tapes everything in his life so that he won’t miss it. He starts to follow street artists all over the world, amassing a prodigious amount of footage, and entirely missing the lives of his own children, and all the ways they are growing and changing all the time. He doesn’t watch any of the video, he packs it all away in boxes, for him capturing it is enough. I’m so taken with this idea…the idea that capturing or creating a moment is sufficient, and that making it viewable, let alone sharing it or exhibiting it, is not a necessary part of the process. It put me in mind of Vivian Maier, a photographer whose work was recently “discovered.” during an auction of the contents of a storage locker that proved to contain a massive hoard of negatives.

Maier had lived in New York and Chicago, and she created a remarkable collection of gorgeous street photographs that she never developed. The images are strikingly beautiful…the focus is uncanny, the blacks are rich and dark, the subjects are full of humor and sadness. She has beautiful images of children on the streets and looking through windows, images of lovers and workers and parents and elderly people going about their day. Maier was a nanny but she didn't have a family of her own, and it’s strange to think about her capturing the passage of time in other peoples’ lives, the progress from childhood to old age.

She was never a celebrity, never recognized or acclaimed in her lifetime. She became poor and, I imagine, lonely. Her street photography lie

s in stark contrast to Guetta’s manically hyped shallow “works” and even to Banksy’s street art. But it seems as though they’re all asking the same questions and all deciding that there are no answers but it doesn’t mean they should stop asking, or that we should stop trying to capture moments as they fly by, though we can never catch time as it passes. The attempt may be futile, but that doesn’t mean it lacks value.